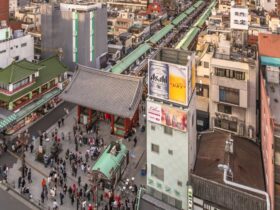 Tokyo’s 10 Most Iconic Places Of Worship (An Exploration Guide)

A look at the Most Populated City in the World and the Different Definitions of Tokyo, and the Best Ways to Take in the View of this amazing megacity.

In this article, we will look at how big Tokyo really is, what parts of Japan make up Tokyo, and how big Tokyo is compared to New York and other cities, and the best ways to view the massive actual size of Tokyo.

We will also look at how traveling in a mega-metropolis such as Former Tokyo City looks like, and how to fully appreciate how big Tokyo really is.

What is Tokyo Composed of?

The Most Populated City in the World?

The Greater Tokyo Area is the most populated city, or metropolitan area, in the world with a total of over 37 million inhabitants. This number is what most people hear when Tokyo’s population is quoted. Included All its suburbs and connecting wards, towns, villages, and areas… it’s accurate.

What is the Most Populated Prefecture of Japan?

The Tokyo Metropolitan Prefecture is the most populated in Japan with 14 million inhabitants, ranking first place for population size.

The 23 Special Wards of Former Tokyo City are special because they are the hub of commerce and trade as trains all over Japan go through Tokyo Station. About 9.3 million of the 14 million of the Tokyo Metropolis live here in the special wards, which is about 66%.

When tourists think of traveling to Tokyo, it is the 23 Special Wards of Former Tokyo City that are usually what they have in mind.

What does “Tokyo” Actually Refer to?

In any Japanese geography book, you will find that Tokyo actually refers to the Greater Tokyo Metropolitan Area.

However, if you ask any resident about Tokyo, they will infer that you mean Former Tokyo City and not the Tokyo Metropolitan Area.

How Big is Tokyo Compared to New York and Other Cities?

Population Size of Tokyo Compared to Now York and Other Cities

How Long Does it Take to Ride the Subway from One Side of Tokyo to the Other?

If we go from Nerima City on the far west side of Tokyo and take the subway all the way to the east side at Edogawa City, it takes about an hour and a half-hour.

JR Pass A Great Way To See Japan AT A Discount

How long Does it take to Walk Across the Biggest Ward in Tokyo?

If we look at Ōta City, the largest Ward in Tokyo with a size of 60.66 kilometers squared, it would take one hour and 55 minutes to walk from Den-en-chōfu Station to Ryutsu Center Station.

Even though the subway route travels north into the heart of the city, and back down into Ryutsu Center Station, it cuts down travel time by more than half to only 46 minutes.

What is the Best Way to Appreciate the Size of Tokyo?

Taking a trip to the Tokyo Skytree is the best way to appreciate the size of Tokyo. It offers two observation decks at heights of 1148 and 1476 feet, making them the highest observation decks in Japan. The top floor has massive windows that give a 360-degree panoramic view of the city.

According to the Official Skytree website, even when looking across the huge city skyline that the Tokyo Skytree offers, you still won’t be able to see the edge of Tokyo’s skyscrapers and city building. You’ll feel like you’re walking through the sky with these stunning views.

What are Other Observation Towers that Should be on Every Tourist’s List to Fully Appreciate the Size of Tokyo?

What is Shibuya Sky Tower?

Shibuya Sky offers a rewarding experience that allows you to ‘feel’ the view with an open Sky Stage that lets you breathe in the atmospheric air.

From the 14th floor, you enter the Sky Gate, an elevator that takes you up to the 45th floor. “Paradise Lounge” is available on this floor with a music bar and a breath-taking view of Shibuya, and delectable foods based on the idea of flying.

A few levels up is the Sky Stage, located on the 47th floor with open-air access for a very personal experience with the vistas of Tokyo.

What is Tokyo Tower?

Tokyo Tower is one of Japan’s landmarks, recognized across the globe as the ‘bright orange tower’ and one of the best locations to take nighttime shots of the city life. Tokyo Tower is also situated near one of the financial districts, allowing you to really capture the life and lights of the night.

Before Skytree, Tokyo Tower used to be the tallest tower with a height of 1089 feet, making Tokyo Tower about half of Skytree’s height.

The best time to visit Tokyo Tower is during the nighttime and sunset when Tokyo’s nightlife comes to life.

The closest train stations are between 10 and 20 minutes, making reaching Tokyo Tower a little more difficult than other attractions, but Tokyo Tower makes up for it with its memorable experience.

Tokyo Tower also allows for time slot booking, breaking up the queue and allowing you access to the observation deck sooner. Your ticket also comes with an optional guided tour, going through the history of Tokyo Tower.

Tokyo Tower always has something new going on as well, available on its official website, from Bungee VR on the main deck to escaping from a shaman fight, to tea ceremonies, so it’s always good to plan your tour before you go to catch as many limited-time events as possible and take advantage of all the attractions along the way.

What is the Tokyo Metropolitan Government Building?

The Tokyo Metropolitan Government Building is 797 feet high and has two towers located at the north and south of the building, each with its own observation decks with stellar views of Tokyo. These observation decks are not as well-known as others like Tokyo Tower and skytree, so there is less of a crowd, and the tickets are free.

Due to higher regulations, visitors will have to go through a bag check before riding the elevator to the 45th floor.

What is the Roppongi Hills Mori Tower?

Standing at 780 feet, Roppongi Hills has a lot to offer: shopping areas, art museums, cafes, and restaurants, plus the stunning view on the 52nd floor of the Mori Tower.

Roppongi Hills offers the unique Sky Deck, an open-air rooftop with a beautiful view of the surrounding Tokyo that’s open for observation when Tokyo weather is clear.

You can feel the crisp air up on the roof as you observe Tokyo Tower and other unforgettable sights.

What is the Park Hyatt Hotel?

At 771 feet, the Park Hyatt Hotel gives you your own personal view of Tokyo from your bedroom window and the high-end restaurant, you’ll get a feel for how big Tokyo really is.

The hotel’s 52nd floor panoramic views have full-length windows in most of the hotel’s common areas, displaying the sprawl of Tokyo below as if it were a checkerboard you could reach out and touch.

For those staying in one of the hotel rooms, each room comes with incredible views so you can have your own personal observation deck, no lines or queues, or other crowds of tourists.

Park Hyatt Hotel also offers smooth jazz and a stellar cityscape view in its New York Bar restaurant. So even if you have other accommodations, you can still take some time out to enjoy the unique view here along with great food and service.

What is the Caretta Shiodome?

The Caretta Shiodome building is 699 feet tall and houses one of Japan’s leading advertising companies. Sights of Tokyo’s Rainbow Bridge and rivers can be seen from the observation deck. The admission ticket is free, and this observation deck isn’t as well-known so it doesn’t experience the same crowd as other observation areas.

The unique feature of Caretta Shiodome is their elevator made entirely of glass as you travel up to the 46th floor, letting you see the entire skyline unfold before your own eyes.

Caretta Shiodome has restaurants available on the 46th and 47th floors if you want to dine out while looking at a spectacular view out the window.