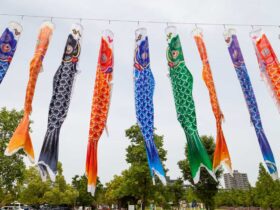 How To Wish Someone A Happy Birthday In Japanese

Odaiba Island is located in Tokyo Bay and is a manmade island that was originally constructed at the end of the Edo period (1603-1868). The island was originally a set of fort islands to protect the country from any attacks by sea, but today it has become a popular shopping and entertainment area.

In this article we are going to cover all of the best things to see and do in Odaiba adjacent to Tokyo Bay, telling you the best places to explore and best attractions to see in each area.

The original plan for this artificial land was to construct a few small islands that could be used as forts to protect the land from sea attacks by boat. In particular, this construction project is a consequence of Commodore Perry’s gunboat diplomacy.

However, one century later Japan decided to combine the smaller islands to create a landmass where they could build new housing and business centers for future growth. Sadly, with the end of the “bubble economy” in the early 1990s this construction project would begin only to grind to a halt.

However, with the completion of several hotels, a train line, and a shopping center the island quickly regained momentum and became a busy tourist spot as well as a hot spot for the locals to entertain themselves with a myriad of attractions.

Currently, the island is booming and is home to some of the most futuristic buildings in the whole of Japan.

What can you see and do in the Fuji TV area?

Thanks to the growth in popularity of this island there is so much to see and do. The popularity of Odaiba island as an entertainment hot spot in Tokyo means that there are a wide number of things to entertain yourself, so here we will list some of the best in each area, beginning with the Fuji TV area.

Decks is a popular shopping mall that is home to many various stores which are open daily from 11 a.m. to 9 p.m. Here you find just about everything you could possibly need to keep yourself entertained as there are also a large number of restaurants with extended opening hours until 11 p.m.

In addition, there are also several indoor theme parks, including Tokyo Joypolis and Legoland. Here you can entertain children for a very long time or choose to wander through the waxwork museum.

The Fuji TV building is the headquarters of Fuji TV which is a private nationwide TV station. However, here you can experience the magic of the station as there are exhibitions about their programs, a store with popular merchandise, and an observation deck.

Even from the outside, the Fuji TV building is a sight to behold thanks to its futuristic and unusual shape and structure.

This is a complex consisting of shops, restaurants, and various entertainment centers. The center was first opened in 2012 and is popular with fans of the anime series “Gundam” thanks to the incredibly large robotic statue of figures from the show on display at the center.

Aquacity is a large shopping center that has both popular stores and small boutiques as well as restaurants and even a large cinema with 13 screens.

On the 5th floor, you will even find a ramen-themed theme park and get the chance to taste different types of ramen from all over Japan.

This is the bridge that connects the mainland to the island. The bridge itself has become an icon of the area and is beautifully illuminated at night.

In addition to its beauty, the bridge also serves to connect the island via train, car and is also used by pedestrians.

What are the best attractions in the Telecom Center area?

The telecom center is home to several satellites and is an important part of the information technology highway in Japan. Here you can gain access to the building from 3 pm until 9:30 pm in the week and from 11:00 to 9:30 pm on weekends.

The building both offers incredible views at its base, thanks to the unique design and coloring, as well as from the observation deck where you can see the bay and even as far as Mount Fuji on a clear day.

Open daily from 10:00 until 17:00, the National Emerging Science and Innovation Museum costs 630 yen to gain admission. This museum is incredibly interactive and has a large number of exhibits covering topics such as robots, environmental issues, biology, and technology.

If you or anyone you know is into futuristic technology and space travel then this is a must-visit.

This museum is certainly noticeable as it is constructed in the shape of a cruise ship that appears to be docked on the water. Here you can discover everything you need to know about ships from the history of ships to the different technologies used over the years and even get on board an actual ice breaker ship.

Entrance to the museum is free and you can enter Tuesday through Sunday from 10 a.m. until 5 p.m.

Where to go in Palette town

Although Palette town is due to be permanently closed from summer 2022, there is still time to explore everything before its scheduled closing.

One thing that stands out in Palette town is the Ferris wheel. Tickets for the ride cost 1000 yen. The Odaiba Ferris wheel is one of the largest Ferris wheels in the world and stands at 377 feet tall. From the top of the ride, you can get an incredible view of the bay as well as the island itself.

You can sit either four or six people in a cabin, depending on whether it is a glass cabin or a regular cabin. A ride on the Ferris wheel will take about 15 minutes in total.

Based on a European town from the 18th century, Venus Fort is a shopping complex that is home to more than 100 individual stores. There is a grand total of three floors and located on the top floor are several popular outlets where you can find some great deals.

The Toyota mega web is a hub for all things related to the Toyota company. Here you can find information about the latest models as well as mock-ups, learn about the company’s newest technology and accessories.

If you have a valid driver’s license then you can test drive some of their display cars. However, if you are unable to drive you can still appreciate the manufacturing process by looking through their museum of old models.

This is a newer digital art attraction that is home to digital images that are displayed in dark rooms to fully immerse you in the artwork. Some works are simply projections whereas others require audience participation and interaction.

Above is a nearly one-hour walk-thru of this digital world that has to be seen to be believed.

A large number of artworks on display, and the beauty of them, means that you can quite easily spend an entire day at Borderless.

It is recommended that you book your ticket well in advance as they sell out quickly. Admission costs 3200 yen.

What to do in the Big Sight area

Tokyo Big Sight is also called the Tokyo International Exhibition Center and along with being the biggest exhibition center in all of Japan, the building itself is one of Odaiba island’s boldest structures.

Throughout the year there are a number of popular events held at the Tokyo International Exhibition Center, including the International Anime Fair and Tokyo Motor Show, both of which attract a large number of visitors from all over the world.

The opening hours and admission fee to Tokyo Big Sight depend on the events schedule. So, be sure to check the dates and times of events before visiting.

The Panasonic Center is a hub for all things related to technology. Here the company Panasonic displays their latest inventions and technologies in everything from cameras to home appliances and games.

So, no matter your area of interest you are sure to find something that intrigues you in the Panasonic Center.

There is also an interactive creative museum which is located on the second and third floors of the center.