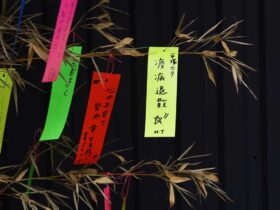 Making Japanese Tanzaku Cards For The Tanabata Festival In July

The Ashikaga Flower Park is 23 acres (about 9 hectares) of lush, beautiful, and serene wisteria gardens in the Tochigi prefecture, just two hours north of Tokyo. The gardens feature one of Japan’s favorite flowers, the colorful wisteria, or fuji as it is known in Japanese.

If you’re visiting Tokyo for the first time or returning to this much-beloved tourist destination, a visit to the spectacular Ashikaga Flower Park is a must!

With something for everyone, you won’t regret a serene afternoon at one of Japan’s peaceful flower parks.

What is the Ashikaga Flower Park?

The Ashikaga Flower Park is a sprawling and picturesque area situated in the southern foothills of Mount Akagi.

Located in Ashikaga City, the Ashikaga Flower Park is famous for its vast gardens of wisteria flowers, as well as thousands of other flowers that you can enjoy. There are also restaurants to keep you satisfied and shops for those who enjoy a spot of souvenir shopping.

The Ashikaga Flower Park is one the best places to experience the beauty and majesty of the wisteria. This plant is native to China, Korea, Japan, southern Canada and the eastern region of the United States and the flowers can be purple, violet, pink, yellow, or white.

The wisteria is an important part of Japanese culture. The kanji symbol for fuji (wisteria), 藤, is part of many family names and the wisteria flower is a popular symbol that can be found on a lot of family crests.

There is even popular kabuki called the Fuji Musume, ‘the wisteria maiden’. In this classical Japanese form of dance drama, a young woman is transformed into the embodied spirit of the wisteria flower.

How do I get to Ashikaga Flower Park?

You can get to Ashikaga Flower Park is by train, bus or car. Most visitors to Japan prefer the clean and efficient railway and you can take a trip on either Japan Railways or the Tobu Isesaki Line.

The Japan Railways (JR) network traverses the whole of Japan and you can get to the park from most major towns and cities.

Most people make their way from Tokyo and if that applies to you as well, you can take either the JR Utsunomiya Line, JR Shonan-Shinjuku Line, or JR Tohoku Shinkansen (bullet train) from Tokyo to Oyama, where you have to transfer to the JR Ryomo Line which will take you straight to the park.

Exit the train at Ashikaga Flower Park Station, a dedicated stop for the park, and walk the three minutes to get to the entrance.

You can also take the Toby Railway from Tobu Asakusa Station in Tokyo to Ashikagashi Station. The trip, which is about 70 minutes long, will cost about 2,040 yen if you go directly on the ‘Ryome Limited Express’, or 990 yen on a regular train.

You’ll need to take a shuttle bus from Ashikagashi Station to the park; however, check the timetables if you’re visiting in the off-season as the shuttles only run on weekends and public holidays.

The shuttle is free, while a taxi from the station is about 3,000 yen.

The History of Ashikaga Flower Park

The Ashikaga Flower Park is famous for its hanging wisteria vines, some of which can be dated back to 1870!

How is Ashikaga Flower Park laid out?

The Ashikaga Flower Park has a number of wisteria displays in which the flowers dangle from massive frames that people can enjoy from the tunnels below. All of this occurs amongst spectacular manicured gardens and artificial lakes including flower domes, pyramids, hillocks, arches, and a waterfall.

There are also eight gardens that correspond to the park’s eight floral seasons and you can enjoy a meal at one of the parks’ several restaurants.

For those of you interested in a set menu, you can enjoy one of several gozen, which is a traditional Japanese dish curated for optimum taste and health benefits. There is the Hana Gozen, Hanamizuki Gozen or the special Fuji Gozen.

For a treat, you can order the Spring Celebration Gozen between January 1 and February 28.

What are the Eight Floral Seasons of Ashikaga Flower Park?

Japan celebrates eight floral seasons that are thematically represented by the nation’s favorite flowers. They are divided into the following chapters, with a suite of flowers to suit everyone’s tastes.

There is a garden for each chapter for you to enjoy at Ashikaga Flower Park.

This chapter covers early January to Late February and during this time you can experience the beauty of the blood-red Pheasant’s-eye, the Christmas rose, and the Winter clematis.

With the warmer breeze of spring in the air, Chapter 2 is relevant from early March to the middle of April when you can enjoy the elegance of tulips, as well as crocus flowers and Thunberg’s meadowsweet.

The heart of spring, which occurs from mid-April to mid-May, is a celebration of the wisteria. Chapter 3 is the time to celebrate the Japanese wisteria, the Japanese azalea, and the peony flower’s glorious rainbow of colors.

As spring turns into summer, you can enjoy the elegant roses, bold rhododendron, and wild clematis. This occurs for a short time only, from mid-May to early June.

As the temperatures rise and summer takes hold, you can enjoy the beauty of iris flowers, hydrangea, and late-blooming clematis. The best time is from early June to early July.

From early July to late September, when the heat of summer has started to wane, you can enjoy the park’s intricate lantana flowers and beautiful water lilies.

If you’re excited by color then Chapter 7 is for you. From early October to late November, you can enjoy the purple, violet, and mauve hues of the garden’s Amethyst sage and pansies.

From late October to late January, the cooler winter temperatures are the best time to view the park’s pansies, violas and to enjoy the twinkling beauty of the Winter Illumination festival.

What is the best time to visit?

Although the park is open throughout the year, it is best to visit during the spring if you want to see the famous wisteria plants when they’re at their best. One of the park’s highlights is a 140-year-old ‘Great Miracle Wisteria’ tree, which only blooms during the spring.

If you’re in Japan during the winter months, you can’t miss its famed Winter Illumination. This is a festival in which every corner of the park, from the trunks of the trees to the vines and bushes, is covered in spectacular, multi-colored LED lights.

Is there anything else I need to know?

During the wisteria season, which typically runs from late April to early May, the park is open for longer each day.

The park is closed on December 31 and the First Wednesday and Thursday of February.

The cost to enter Ashikaga Flower Park depends on the season. The good news is that the park is free to enter in January, February, March, July, August, September, and December.

You will have to pay if you visit during the peak periods of April, May, June, October, and November.

The price varies between 300 and 1200 yen for adults and 100 and 900 yen for children. These fees might change so make sure you check ahead before your trip.