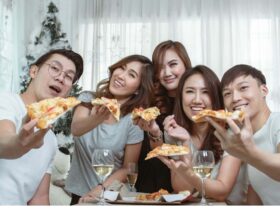 Early in the summer, most of Japan is hit by its rainy season, known as tsuyu which translates to “plum rain” because it coincides with the ripening season for plums.

The impact of chilly northern and warm southern air masses causes the rainy period, which occurs in a reasonably stable severe cold front across the Japanese archipelago for numerous weeks.

The rainy period in Japan is unlike any other. You may have breathed a sigh of relief as spring arrived in April and May, and the cherry blossoms began to bloom, having avoided Japan’s bone-dry winter air.

The Start and Finish of the Season of Rain

Every year, the Japan Meteorological Agency estimates and announces both the start and end dates of the rainy season.

The rain clouds began to fall in the southern sections of the country such as Okinawa and gradually move north. As a result, the rainy period begins in the south and ends in the north.

As indicated in the table above, the rainy period in the Kanto region, which includes Tokyo, normally begins around June 7 and ends around July 19.

The Season of Rain in Japan.

The rainy period usually lasts from early June to mid-July. The average rainy season, according to the Japan Meteorological Agency, has been from roughly June 7 to July 19 since 1951.

Summer in Japan is heralded by humid days punctuated by the occasional downpour as sometimes more inclement weather systems as if it were an annual rite of passage.

In early spring, two warm bodies of air one from the North Pacific and the other from Southeast Asia – clash with two cooler bodies of air from China and the Sea of Okhotsk.

As June approaches, this unlucky meeting culminates in a period of constantly wet weather for everyone trapped in its path.

The Average Temperature During the Season of Rain

The temperature during the rainfall can be perplexing, since you may feel warm on a sunny day but cold when it rains. When there are long periods of rain, particularly if it occurs during the day, the air becomes extremely humid.

However a short-sleeved tee is ideal for the day, a light jacket or cardigan should be brought along for the night and if it rains.

You’re still in luck if nature isn’t your cup of tea. When the glittering city lights of Tokyo are reflected on the wet streets after a rainstorm, they are even more striking and interesting to explore.

What to Expect During the Season of Rain in Japan

You’re undoubtedly thinking how awful the rainy period will be by now. After all, Japan has a reputation for having some of the world’s most extreme weather. You should expect a lot of rain, as the name suggests.

Thankfully, this isn’t a common daily occurrence. You can also expect a steady supply of gloomy, overcast skies and the occasional gust of strong wind.

Though you spend enough time outside, you’ll begin to feel as if you’re swimming on land. Simply put, during this time of year, there is no way to avoid feeling like a soggy, sticky mess walking in highly humid summer days.

How to Deal With the Rainy Period in Japan.

Those of us who are visiting south of Hokkaido must brace ourselves for the many inconveniences that the rainy period will bring. However, with a little forethought and the correct equipment for the job, you can breeze through the season as the locals do.

Some of the top items to carry in your rainy-day kit are items like:

Preparing your home for the rainy period in Japan

Let’s look at how you may make your day-to-day life more comfortable now that you have the necessary equipment to weather the storms. Assuming you’ll be taking refuge from the rain indoors, the suffocating humidity will be your main concern.

Moisture absorbers are ideal for closets and tiny bathrooms, but larger living areas will require something a little more robust. For this, we’ll need some common household items that you probably already have on hand.

Enjoying the rainy period in Japan

There’s no need to be concerned if the weather does not cooperate with your original vacation plans. Here are some must-see locations and suggestions for how to pass the time during the rainy period.

In Japan, the rainy period is accompanied by the blooming of hydrangeas. You can see its beautiful blossoms in a variety of locations across the country.

Elegant irises are also in flower at this time, and they appear particularly stunning during the rainy period. Traditional Japanese gardens, as well as gardens at shrines and temples, are full of flowers.

Despite all of the inconveniences that come with the rainy season, one thing is constant: daily life in Japan continues regardless of the weather. You can’t completely avoid it, but with a little planning and forethought, you can make it much more bearable. So, if your holiday to Japan falls inside this timeframe, don’t cancel your flight just yet.

You’ll be hard-pressed to find a better time to visit gorgeous locations like Kamakura, Nagano, or Wakayama if your vacation to Japan includes them. The extra rain just adds to the lushness of Japan’s famed tree-covered mountains.

Even if you plan to spend your entire trip in Tokyo, the city has a large number of parks that are transformed into urban oasis during this time of year. The lush green tones will make for some spectacular photographs.

You’re still in luck if nature isn’t your cup of tea. When the glittering city lights of Tokyo are reflected on the wet streets after a rainstorm, they are even more amazing.

Virtual Tour Of Tokyo In The Rain