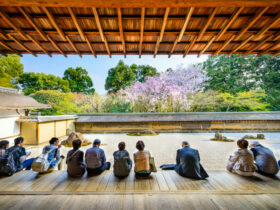 Pickled fruits and vegetables, known as tsukemono in Japanese, are staples on most tables in Japan for just about every meal.

Whether they serve as an addition to a certain meal or add some color and depth of flavor to a simple dish, tsukemono is one of the fundamental components of Japanese diets.

What Exactly Is Tsukemono?

Tsukemono consists of vegetables, fruits, and other items that are preserved in brine. They are typically set in salt and either rice bran or salt brine in order to become pickled.

This results in a crunchy, salty flavor kick to just about any fruit or vegetable you can imagine.

The Origins Of Pickling In Japan

Much like in other countries, pickling was the way to keep food preserved and edible before the invention of refrigeration. Even though technology has advanced, the enjoyable experience of preparing tsukemono and adding it to various dishes has not been forgotten.

Pickling is done differently throughout Japan, and the process has been tweaked to experiment with different flavor profiles, and by using all sorts of fruits and vegetables. The resulting tsukemono can be used in many ways.

Tsukemono will be used to garnish dishes, add some flavor, cleanse the palette, or even to aid in the digestion of food. It’s also possible to purchase tsukemono in Japanese grocery shops around the world.

Ichiju sansai is a standard Japanese meal, which will usually consist of a soup and three accompanying dishes. Tsukemono is an integral part of this meal, though it could technically be considered another accompanying dish. That being said, they’re meant to garnish and add flavor to the other dishes.

The soup will usually be either miso soup or a light broth soup, and there will be a dish of rice, a main dish of either sashimi or a grilled item, a small dish of or nimono, or a simmered food, and a side dish of aemono, which is a dish of different foods that have Japanese sauce on them.

While this might sound like an elaborate setup for a meal outside of Japan, it’s fairly customary to eat this way for different meals during the day in Japan.

Yoshoku is what the Japanese interpretation of Western-inspired foods is called. The Japanese have enjoyed taking inspiration from Western menus to create some unique and delicious dishes of their own.

Yoshoku became prominent in the Meiji period when it was no longer considered taboo or inappropriate to eat meat other than fish in Japanese diets.

Sometimes, a yoshuko dish will be garnished with a little bit of tsukemono to add a Japanese flair to the dish.

In Japan, the experience of eating food is just as important as the food itself. Their tsukemono not only makes their food more visually interesting, but it creates a different experience on the palette. They can also be a palette cleanser when enjoying rich dishes.

What Brines Are Used In Tsukemono?

Fruits and vegetables can be brined with different ingredients to make a variety of unique tsukemono. Sometimes, ingredients used in brines are combined together to reimagine some new tsukemono flavors.

While it’s known that salt and rice bran are used often in tsukemono, other ingredients are used as well. For example, soy sauce is sometimes used for pickle foods. Vinegar, miso, and sake lees (a by-product of making sake) also make for some tasty tsukemono.

What Types Of Tsukemono Are Enjoyed In Japan

You can pickle just about anything, but there is some tsukemono that stands out in Japan. You’ll often see these accompanying your meal when you dine out in Japan.

Takuan is made with daikon radishes. The radish is dried and usually pickled with rice bran and gardenia fruit, which changes the color of the daikon radish.

Iburigakko is also a type of pickled daikon radish, but they look a little bit different. This is due to them being smoked instead of dried, which enhances the flavor of the radish in a unique way. The radish also stays crunchy when it’s made into iburigakko.

Bettara zuke is also pickled daikon radishes, but they are pickled using a brine consisting of salt, sugar, rice, and rice koji.

Narazuke is the process of pickling unique to the Nara region, but it is enjoyed in other parts of Japan as well. The vegetables used in this pickling process are usually cucumber, uri, or daikon radishes.

These vegetables are soaked in sake lees and are often pickled for many years before they are consumed. The resulting flavor is quite strong.

Rakkyo is a pickled Chinese onion, which is pretty small. They are pickled in either sweet vinegar, salt, or soy sauce, and make a nice accompaniment to many dishes, including Japanese curry.

Umeboshi is a pickled ume, which is often referred to as a Japanese plum. In terms of flavor, this fruit typically tastes like an apricot with a little bit of that plum tartness.

Ume is dried out before it’s placed in a salt brine, and there is usually a component within the pickling process that weighs the ume down. Some ume will be packed with honey to enhance the sweetness, while others will be packed with purple shiso leaves for a bright pink hue and a salty, sour flavor.

Koume is similar to umeboshi, only smaller plums are used. When koume are pickled, they typically stay crunchy throughout the process.

This tsukemono is one you’ll see quite often on a traditional Japanese menu. Hakusai no sokusekizuke are pickled vegetables, often pickled through a quick process, using salt.

Some components often seen in hakusai no sokusekizuke are cucumber, carrots, and hakusai cabbage. These tsukemono are then topped with togarashi pepper, yuzu zest, and konbu for a vibrant and citrus garnish.

Asazuke consists of vegetables that are quickly brined so the vegetables stay crunchy. These are very easy to make on your own and are popular in Japanese cooking. Asazuke will often feature eggplant, cabbage, daikon radish, and/or cucumber.

Shinshoga is pickled ginger leaves made by soaking ginger in sweet vinegar. Pickled ginger is sometimes cut into thin slices and served with meals such as sushi, and is subsequently known as gari.

Beni shoga is ginger that has a bright red hue, though that hue is sometimes manufactured with dye in processed pickled vegetables.

However, the beni shoga is brined in umezu, which is brine that is made through pickling umeboshi.

Shibazuke is a combination of different summer vegetables, popularized in Kyoto but enjoyed in other parts of Japan as well. These vegetables are usually eggplant, myoga, cucumber, and shiso leaves.

These vegetables are subsequently pickled using Japanese plum vinegar, which is also known as umezu.

Kyurizuke is pickled Japanese cucumbers. They are sometimes brined quickly in order to maintain their crunchy texture. Otherwise, they might be pickled using a brine of rice bran or miso.

Aokyurizuke is pickled Japanese cucumbers that are made with a brine of soy sauce. These pickles have a nice savory finish.

Matsumaezuke takes items that are popularly enjoyed in Hokkaido, such as konbu, squid, carrots, and herring roe, and pickles them in with sake, soy sauce, and mirin.

Nukazuke is a process of pickling assorted fruits and vegetables with a combination of salt, kombu, and roasted rice bran. The process can be time-consuming depending on how long the pickling is desired, but the contents need to be turned every day by hand.

Saikyozuke is an interesting pickled dish that uses fish, such as cod or sablefish, that is preserved in a miso paste. After the pickling is done, the saikyozuke is usually cooked by grilling or broiling it.

How To Make Tsukemono