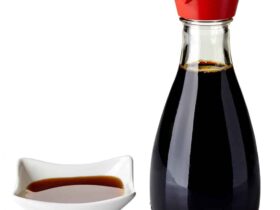 Simply defined Sashimi is extremely fresh raw fish or a variety of meats cut into thin slices and served with soy sauce and wasabi is a Japanese delicacy.

Many non-Japanese people confuse sashimi and sushi, although the two meals are distinctive. Sushi is a Japanese word that refers to any fish or meat prepared with vinegared rice.

Although raw fish is a classic sushi component, many sushi meals also include cooked seafood and meats, and others may contain no seafood whatsoever. Sashimi, on the other hand, is always served alone and is uncooked.

Sashimi is typically served as the first dish of a traditional Japanese meal, but it can also be served as the main course with rice and miso soup in individual bowls. Sashimi is the finest meal in Japanese formal dining, according to Japanese chefs, and should be consumed before other flavored foods might affect the taste of the sashimi.

Sashimi is commonly served with a dipping sauce, soy sauce, and condiments like wasabi paste, grated or sliced fresh ginger, grated fresh garlic, or ponzu for meat sashimi, as well as shiso and shredded daikon radish as decorations.

When eating sashimi, wasabi paste is occasionally put directly in soy sauce as a dipping sauce, which isn’t really recommended with regular sushi.

Apart from its taste, one hypothesized reason for serving wasabi with sashimi (and possibly pickled ginger) is to eliminate unwanted bacteria and parasites that may be found in raw fish.

It is a Japanese favorite, where it is known as hamachi or buri. Cooked or raw, these fish are a seasonal favorite during the winter months when the flesh has a higher fat content. Toyama and the Hokuriku area are known for their winter delicacy, amberjack, or yellowtail.

Some of the fish eaten is taken in the wild, but the majority is farmed. A dark muscle line may be seen around the border of yellowtail fillets. Meat is white and firm, with a little sweetness. The buttery mouthfeel comes from the high oil content.  A very mild-flavored fish.

Kochi’s Katsuo no Tataki is a classic Japanese dish. It’s made up of sliced bonito (skipjack tuna) that’s been lightly grilled and served with ginger, garlic, and spring onions on the sides. Vinegar, lemon, and either salt or soy sauce are used to season the meal.

Katsuo no tataki is traditionally cooked over a straw fire just until the outer layer is lightly charred.
When the bonito skin is carefully seared and blackened, it gives the sashimi a fantastic aroma.

Mackerel is an excellent Sashimi fish because of its firm, oil-rich meat and delicious, creamy taste. Mackerel’s strong, complex tastes complement delicate Japanese sauces perfectly, and the large quantity of fatty acids provides plenty of health advantages. However, like with any sort of fish used in Japanese cuisine.

In Japanese seas, there are around ten distinct varieties of tai, but madai is the favored variety for sushi. As a result, the terms tai and madai are commonly exchangeable when describing the fish in a sushiya.

Tai is known as kasugo when it is juvenile and is deemed a silver fish (hikarimono). The flesh of the sea bream lightens in color, tightens up in texture, and has a rich, sweet flavor as it grows to three pounds or more.

Tai season starts in the winter, although it doesn’t peak until the first week of Spring. The fish is then known as sakura-dai (cherry blossom sea bream) and sells for a high price.

The fish is generally eaten raw, but it may also be prepared with the skin lightly charred) or with the skin tenderized by showering it with boiling water and then immediately cooling it with ice.

Sake or salmon  Sashimi is a light and tasty appetizer or entrée option. Served with fresh wasabi, ginger, soy sauce, or a delectable soy yuzo citrus ponzu on the side. Tender, fatty, and tasty form of sashimi.

Salmon is flash-frozen once caught to kill any parasites and prevent illness.  Until the technology to freeze quickly the Japanese didn’t eat uncooked salmon for this reason.

Due to its tetrodotoxin, fugu can be fatal to humans, therefore it must be properly processed to remove hazardous portions and avoid contaminating the flesh.

In Japan, the preparation of fugu in restaurants is highly regulated by law, and only chefs who have completed three or more years of rigorous training are permitted to do it. Home preparation can sometimes result in unintentional fatality by those who have caught the fish themselves.

Sashimi and chirinabe are two ways to eat fugu. Although some believe the liver is the most delicious portion, it is the most dangerous, and serving it in restaurants in Japan was outlawed in 1984. In Japanese cuisine, fugu is now one of the most well-known delicacies.

Bluefin tuna, also known as maguro (mah-goo-roh) or hon-maguro, is the most well-known and widely consumed fish in all of sushi and sashimi menus across Japan. What is today’s standard fare was not always the most popular item on the menu.   Toro, or fatty belly flesh, is currently one of the most costly menu dishes, praised for its flavor, texture, and rarity.

Magruo tuna flesh is often quite soft and has a strong flavor. The meat from the middle of the body is called akami in Japanese, and it is dark red, glossy, and very lean. Akami has a delicate tangy taste that is complemented by rich umami flavors.

Prepared from raw squid that is sliced into fine strips and resembles noodles in appearance. They’re usually accompanied by grated ginger and soy sauce or a mentsuyu sauce made with soy sauce. They’re slurped up in the same way as Japanese people consume noodles.

Raw sea urchin is the most popular method to enjoy it. The flavor of sea urchin should be similar to that of the ocean, but it should not be fishy.

Sea urchin has a saline flavor but isn’t excessively salty. On the tongue, fresh ones should have a sweet, saltwater flavor with a hint of iron and zinc. Uni has a strong mineral, seaweed flavor and should have a creamy texture.

Ikura is served raw, however, it is frequently marinated in soy sauce or other spices before being served. The feeling of the eggs as they break on your tongue is one of the joys of eating ikura, and this would be lost if they were cooked. The flavor of ikura is somewhat fishy. Its texture, on the other hand, is what makes it enjoyable to consume.

Each egg is a tiny flavor bubble that bursts with salty ocean taste on your tongue when you eat them. The texture might be off-putting to people who are tasting Ikura for the first time, although if you get used to it, it is rather delicious.

Octopus or Tako is a popular Japanese dish in which the tentacles are finely cut and served as sashimi. Tako may be consumed directly raw, but it’s more customary to lightly cook them first to give them a sweeter flavor and a firmer less chewy texture as those served completely raw will have.

Hokkigai is best served as sashimi, a delectable Japanese delicacy with a distinct flavor and subtle aroma. It has a distinct texture that for some prefer cooked rather than uncooked. A frequent technique to prepare surf clams is to sauté them in butter with soy sauce.

Hotate scallops have a delicate texture and exquisitely soft and sweet flesh. Hotate is commonly consumed raw in the form of sushi or sashimi in Japan. Grilled or roasted scallops, on the other hand, are delicious.

Shrimp or ebi, in some restaurants in Japan, are raw in sashimi, but almost always lightly poached. The poaching brings out sweet and subtle flavors otherwise overpowered by a metallic flavor. It also prevents the highly perishable shrimp from losing texture to spoilage.