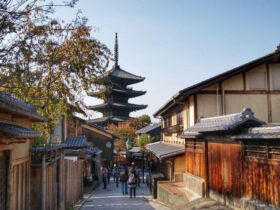 Once In a Lifetime Trip to Kyoto? (10 Things You Must Not Miss)

Staying connected while traveling in Japan has numerous choices. It’s best to find the best choice to keep from spending too much cash on mobile or internet services.

Japan has a large variety of tech options while your visiting. If you are worried about excessive charges on your personal phone then there’s a lot of ways to save money rather than racking up fees and expenses on your mobile phone.

The first option is renting a phone rather than using up data and service on your own device. One of the best companies to rent a phone is JAL ABC. The JAL in the name is Japan Air Lines. One of Japan’s two main airlines.

JAL ABC is easy to set up and get on your way. Located at three of Japan’s major airports they have a service desk for applications, phone pickup, and returns. Located at Haneda (Tokyo), Narita (Tokyo), and Kansai (Osaka).

Payment can be made either by a major credit card or in Japanese Yen.

Renting A Sim Card For Your Existing Phone

For the less tech-savvy the simplest definition of a sim card is:

A SIM card is a tiny chip that contains data about your network and may be inserted into your phone. It allows a network to quickly identify your device and guarantees that customers can connect to the services they pay for without having to go through a prolonged account setup.

Before purchasing a sim card you need to make sure that your phone is compatible with mobile phone networks inside the country. The easiest way to confirm this is the site will my phone work:

Select the Advanced tab if you don’t see your phone maker and model listed in the drop-down tabs on the home page.

Changing out your SIM card sounds like a high-tech procedure but is actually quite simple. For example, if you have an iPhone all you will need is a paper clip. Check out this page on the apple support page.

Change Your SIM Card On An IPhone

Most phone manufacturers will have a similar page that explains how to change it out. However, if you wish to have it done by the SIM card seller in Japan many of the staff will be familiar with this procedure.

The company MOBAL will sell you a SIM card online and ship it to your country of residence before you depart for Japan. This will make it easy if you want to have your current provider change out the SIM card just before departure.

Check with your provider beforehand to make sure of their policy. SIM cards are also available in major cities in Japan on arrival. (at many airports)

Japan like most modern countries has thousands of free WiFi hotspots. By having a smartphone that can connect to one of these free spots you can browse the web and also make calls via Skype, Zoom, and other Internet-based calling services.

Payment to phone numbers may incur a charge so whomever you’re calling it’s best if they have one of the mentioned apps to avoid charges. These apps may charge fees for calling a landline or mobile number directly.

From Japan, a short call thru your cell phone back to your home can be very expensive. Depending on your provider a call duration of a short time can turn out to be over $100 so it’s best to make sure you devise a plan to stay in touch that doesn’t come with an expensive rate.

The following site has thousands of free WiFi Locations across dozens of cities. The map can be downloaded and used offline. If you land in Japan and have no service just use the map to locate the nearest free WiFi spot to make calls and go online as needed.

Note: Anytime you use public WiFi hotspots there is more security risk with your device and data.

They’re straightforward to set up, deliver fast internet, operate everywhere there’s mobile phone connectivity, enable you to connect several devices at once, and are reasonably priced rental fees. Wi-Fi routers may be rented daily at major Japanese airport terminals or ordered online and delivered to your hotel.

These gadgets are more secure since they require a security password to gain network access. Often the pocket WiFi rental company will adhere the password to the device to make sure it doesn’t get lost.

These small pocket routers are surprisingly fast and allow great download and upload speeds. Japan has some of the fastest internet speeds in the world, so these devices may actually be faster than the router you have back at home.

Here are the two best options we have found. Ivideo has great rates for longer-term stays (over 30 days).

Using A Phone In Public

One thing to remember is there is somewhat different phone etiquette in Japan than in many western countries.

Using mobile phones in public settings such as trains, buses, cafés, and restaurants is a significant breach of etiquette that can lead to negative looks.  Japanese people rarely confront someone directly as they tend to avoid conflict.

Telephone calls on the platforms at either end of each of the trains outside of the sitting compartment are only permitted on long-distance trains.

Additionally, whether taking public transit or dining at a restaurant or bar, put your phone on silent mode. It is never a good idea to listen to music without headphones in public places.

Walking and taking on your phone is also discouraged as major cities’ sidewalks can be a hazardous area from bicycles and heavily crowded areas.  Although it’s regularly seen happening even by some Japanese it is still considered a lack of consideration for others.