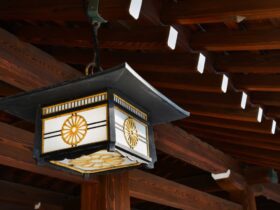 Japan’s Flower Of Power: (Chrysanthemum) The Seal Of The Emperor

Shintoism burgeons with various gods, entities, spirits, and otherworldly beings. It’s a myriad of beings and no one person can understand them all in a lifetime. However, the Obake and Bakemono are living shapeshifting spirits which are interesting to explore in Japanese mythology.

The Obake and Bakemono blur between other supernatural creatures such as the Yōkai and Yūrei. Regardless, they’re an important aspect of Shinto mythology and intrinsic to Japanese culture.

Due to the deliberate meshing of various spirits, it’s important to first understand the difference between Yōkai and Yūrei. While they are separate, they are also transposable.

In Shintoism, Yōkai (妖怪) are animal spirits with the ability to change into human form. People in the West could liken them to fairies, sprites, goblins, and supernatural creatures. The first mention of them comes from a Chinese manuscript in the 1st century AD.

Yōkai roams randomly and freely. They are often mischievous but usually harmless. Nevertheless, sometimes their antics can cause danger to humans.

The Yūrei (幽霊), translating to “faint spirit,” are ghosts. As in the West, the Japanese believe humans have a soul, or reikon (霊魂).

However, when the body dies, the reikon leaves and enters a type of purgatory until the completion of a proper burial. Then the reikon may join its ancestors in the afterlife.

However, if the person dies in a sudden or misfortunate manner, like suicide or murder, or the proper burial rites go unperformed, then the spirit manifests as a Yūrei.

It will live on until it sees justice or the proper burial. They reside near their bodies or where they experienced wrongdoing.

The Yūrei have white clothing, long black hair, and are without feet or legs. They look as if their body tapers into nothingness below the waist.

Both Obake and Bakemono translate loosely to “a thing that changes.” It refers to a ghost, spirit or supernatural entity that can change its form.

Many people view them as self-serving entities having moral ambiguity with a touch of hedonism. They do what they want when they feel it serves them and usually minds their own business.

They are often semi-human monstrosities that appear distorted and twisted. However, many Yōkai can shapeshift without being an Obake or Bakemono. But many Obake is Yōkai.

The Japanese Concept of the Supernatural

There is a reason why these lines blur. To the Japanese, there is no difference between the magical and supernatural versus what’s real and physical.

Transformations found in nature are highly symbolic of this. For instance, how a rainbow appears after it rains or the metamorphological process of a butterfly from a caterpillar.

Everything contains a mystery and there’s something inexplicable about what humans perceive to be natural versus the spiritual.

Therefore animals, plants, flowers, trees, and people all contain a spark of divinity. They can be supernatural that’s natural yet not well understood mythical beliefs.

Obakes and Bakemonos are representative of this transformation. But these creatures are pure folklore.

So, they bestow a source of entertainment and humor while also serving as warnings and life lessons. Indeed, many stories about Obake and Bakemono reflect the terrible and awful aspects of human nature.

There are several classifications of Obakes, with some of the more popular ones being:

The Japanese believe household cats can become so magical and intelligent as they age that they can shapeshift into humans. They call this kind of feline bakenko.

These creatures kill and eat their owners, bury them and then shapeshift as them to continue living in their place.

Over the course of time, old paper lanterns split. This became the mouth of a spirit called Chōchin-Obake materializing a long, sliding tongue.

Because paper lanterns are a common feature at temples, they say it can appear at will to frighten patrons.

Kasa-Obake is a spirit materializing from broken umbrellas. It’s a playful yet harmless spirit that has one eye, elongated tongue, and one leg.

These are special types of inanimate objects called tsukumogami. These come to life after one hundred years upon gaining a soul.

Such stories are reminders to avoid throwing away well-aged objects with a long history.

Kitsune Foxes are a very famous Obake for they are the trickiest. These are creatures with nine tails and can manifest themselves as the most beautiful woman or a haggard old man. In these alternate forms, they feign needing help in some way.

However, when you get close, Kitsune-Obake plays a trick on you. Sometimes these are benign but other times can be harmful.

At a distance, Rokurokubi looks very much human. But, as you get closer, you will see it stretch its neck like saltwater taffy.

There is no end to this freakish elongation and its head comes off to freely fly around. Sometimes, Rokurokubi will be harmful but they’re the most vulnerable when sleeping.

This is because their bodies will wriggle around. If the head hasn’t yet been reattached, it can wander away aimlessly. It’s when their heads strike out on their own that it causes the greatest amount of horror and damage.

The realm of Bakemono has its own classes too. These monsters have specific functions and legends.

Their earliest known record comes from an illustrated guidebook on the subject called Bakemono no e or Bakemonozukushie. Dated during the Edo Period, there are some 35 creatures listed.

These include a host of Yōkai and a thorough depiction of a Yūrei along with many Obake and Bakemono. The artwork in this book is stunning.

Each hand-painted figure comprises vivid pigments with accents in gold. There is no other writing indicated on the scroll and there is no seal or signature denoting a particular author or artist.

While all of the creatures and their illustrations are worth exploring individually. The three mentioned below sample the style and grace of the powers behind such supernatural beings.

She suddenly appears to weavers and spinners, assisting them with her supernatural pace and leaving just as quickly as she came.

But one particular depiction carries a darker connotation. Nure-onna (ぬれ女), or “wet woman” is a gigantic snake with a woman’s head, being a nightmarish blend of a vampire with a sea serpent.

She roams all open waters searching for humans to feast on their blood. Often seen near Fukushima, Niigata, and Kyūshū, she tricks strangers into holding her baby.

The baby becomes so heavy the victim is unable to move. She and her husband, Ushi-oni, then arise from the depths of the water to devour these unfortunate victims.