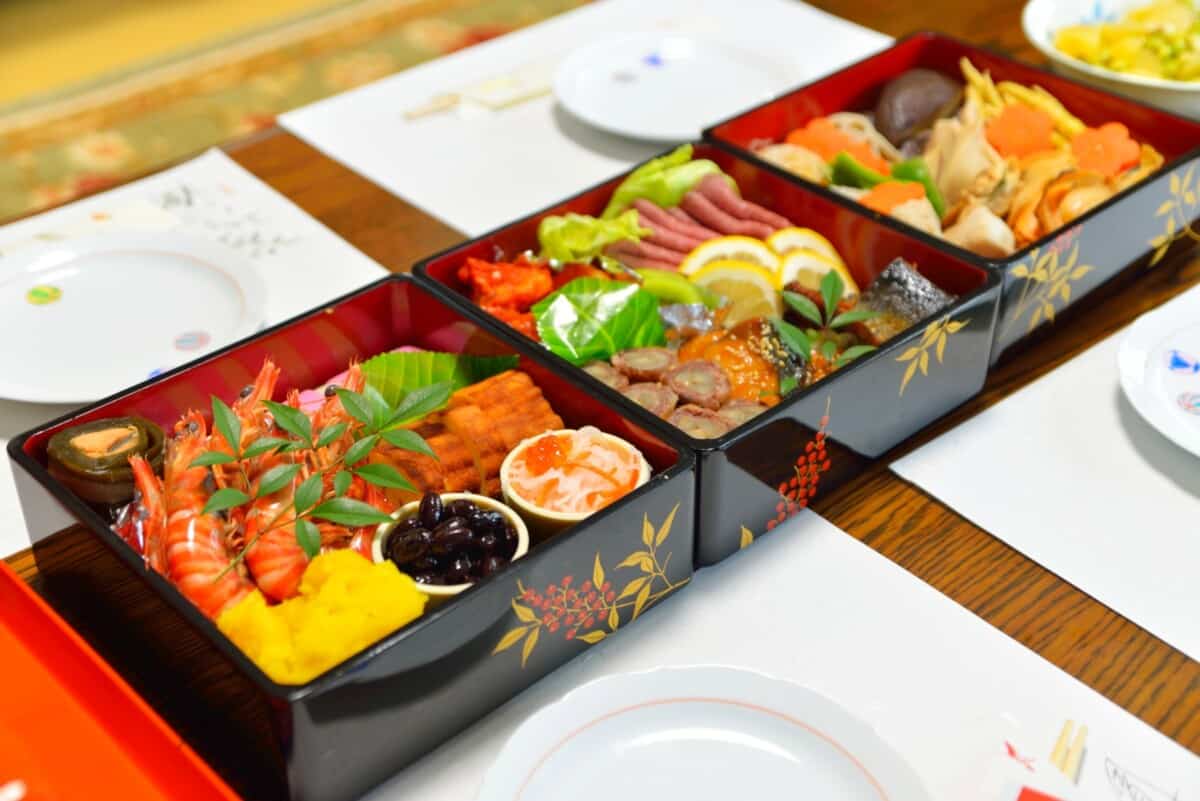 New Year is a very important part of Japanese culture and is a time when families come together and eat good, traditional foods that hold special importance for bringing in the new year.

Although many people often associate the New Year’s celebrations with loud music, fireworks, and sometimes even excessive drinking, New Year in Japan is a much quieter celebration that often involves family rather than friends.

Unlike the loud, vibrant parties in the West, Japanese New Year often involves going to the first shrine of that year, reading books, watching TV, and eating food with family. However, although it is an altogether calmer affair, that does not mean that it is any less celebratory.

Food plays a significant part in the celebrations and over the first three days of the year “Osechi ryori” is eaten. Osechi ryori is auspicious food that is served in multi-tiered, ornate boxes.

Where did osechi ryori come from?

The practice of eating food as a celebration for a religious day or other festivals dates back centuries in Japanese culture.

It even dates back as far as the Nara period (spanning from 710 to 794) when food was offered to the gods or kami on seasonal turning point days.

These offerings were originally held by the nobles in society but with the Edo period (1603 to 1868) these practices became more commonplace and were practiced by commoners in Japanese society.

Although these offerings were held several times a year, over the years they became highly associated with New Year’s celebrations and this is where the tradition began.

Osechi ryori can be savory, sweet, or both. So, here we will go over some of the most popular and common foods that are eaten around the Japanese New Year.

Toshikoshi soba is a special type of noodle dish that is eaten for New Year’s celebrations. The dish is savory and dates back to Japan’s Edo period.

The dish uses soba noodles, hence the name, which is brown in color due to the fact that they are made from buckwheat.

This dish is also referred to as “year-crossing noodle” and its characteristics are considered auspicious.

For example, the length of the soba noodles represents longevity, and cutting the noodles signifies cutting out any negative energy or experiences from the previous year, bringing in positive energy for the year to come.

Datemaki is a sweetened omelet that is rolled up and mixed with a savory paste. The shape of the datemaki is actually indicative of the fish within the dish as the edges of the omelet look wavy and the paste inside is added as a swirl.

This dish mainly consists of egg but the addition of mirin, honey, and soy sauce give the dish its sweet flavor. The dish also has “hanpen” which is a white fish cake, making the food even fluffier.

The reason why datemaki is Osechi ryori is because it looks like a rolled-up scroll and hence signifies academic success.

This dish has become well-known throughout the world in recent years and it is incredibly popular in Japan. This dish is often enough all throughout the year but holds a special place in New Year’s celebrations.

The word itself sounds like the Japanese word for “to hold” or “to have” and as such, it brings the meaning of good fortune and achieving this in the new year.

For New Year’s celebrations, the type of mochi that is traditional is made using roasted soybeans powder and is called “kinako mochi”.

Another type of mochi that you can commonly see at New Year is called “kagami mochi” and they are used to decorate by placing two rounded mochi on top of each other and placing them at the Shinto altar in the home as an offering. This type of mochi consists of a bitter orange topping.

Because mochi is such a staple when it comes to New Year there are exciting events such as rice pounding where you can go and see fresh mochi being made and maybe even get to sample some.

This is a dish commonly eaten at New Year’s that is made using a pickled baby turnip. To prepare the dish you will need to carefully cut the pickled turnip into very fine slices before laying it out in a decorative pattern on a plate, sometimes this resembles a flower, and place a chili at the center for color.

You can either buy the pickled turnip from the store or you can make your own. In order to make the liquid to pickle the turnip, you will need to combine salt, sugar, and vinegar.

This dish is both very bright and colorful as well as punchy in flavor, making it a great addition to the table for New Year’s.

Kuri Kinton translates to “gold chesnut mash” and is made using candied chestnuts and sweet potato.

The sweet potatoes commonly used in Japan are much brighter and more yellow in color than those used in the West. In addition, Japanese sweet potatoes are also sweeter in taste.

To prepare kuri kinton you will need to peel, dice, boil and then mash (or puree) the sweet potato.

The candied chestnuts are then added along with mirin, salt, and a small amount of the liquid that the chestnuts were kept in.

Kuromame is a dish made from black soybeans that have been sweetened. The auspicious meaning behind this dish is the ability to work well as well as healthily.

Kuromame can take up to eight hours to prepare as the soybeans are simmered on very low heat in a mixture of soy sauce and sugar. This gives them a beautiful glossy and shiny look.

However, the traditional method of making kuromame involves adding a few rusty nails into the pot.

This is because the iron oxide (rust) reacts with beans and creates a rich and deep black coloring. Many people now forgo this addition and use iron supplement instead.

This dish is herring roe and signifies fertility. Although this representation is perhaps more obvious than other dishes, the name itself lends to the meaning as it displays a wish for numerous children and/or grandchildren.

The fish roe is marinated in a mixture of dashi, mirin, sake, soy sauce, and bonito flakes to give it added flavor.

This is a dish that represents a bountiful harvest (like many other dishes) and is made from candied sardines.

The baby sardines are first toasted before being marinated in a glaze made from soy sauce and honey as well as sesame seeds.

The dish’s name literally means “making rice fields” and relates to its auspicious meaning as previously sardines were used to fertilize rice fields in the hope of bringing in a good year’s harvest.

Along with all of the delicious food consumed around the New Year in Japan it is also customary to have a drink on the morning of the first day of the New Year. This is called “otoso”.

Otoso is sake that is spiced and is made using a number of roots, herbs, and spices. The point of drinking otoso is to ward away illnesses in the new year.

Typically the drink is consumed by the youngest member of the family first all the way up to the eldest, or starting with the head of the home.

Even though many Japanese people are not a fan of the stronger flavors involved in traditional New Year’s dishes they are still prepared and eaten out of tradition. After all, if eating a candied chestnut can help you achieve good fortune in the new year then it is surely worth it.

Although eating these foods is considered tradition many people simply do not have the time to prepare them as many can take days of preparation, or even longer, think of pickling and sweetening all of the ingredients.

So, many people now preorder their traditional dishes from local restaurants or stores in order to be ready for the New Year.

However, these dishes can be very pricey, especially with such high demand, and people can expect to pay upwards of several hundreds of dollars for the complete meal.