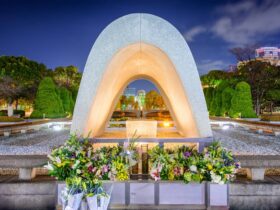 Under the area of Saitama and part of the Tokyo Metropolitan area lies a massive concrete and steel structure that few residents are even aware of. The chambers themselves are there to avert a disaster and have been operating for over a decade.

The great part of this hidden network of chambers is that they are open to the public and seeing them is like visiting the ancient pyramids in the feeling you’ll get seeing the massive underground structure.

It is located in Saitama Prefecture, between Showa and Kasukabe, on the borders of Tokyo in the Greater Tokyo Metropolitan Area.

The project was started in 1992 and finished in early 2006. It consists of five massive concrete water containment silos with heights of 213 feet high and a diameter of 105 feet each.

Connected by four miles of tunnels 164 feet below ground level, as well as a large water storage tank with a height of 83 feet, a length of 580 feet, a width of 255 feet, and 59 massive pillars connected to almost a hundred water pumps capable of pumping up to 200 tons of water into the Edo River per second.

Tours of the facility include four separate types of tours visitors can choose from:

In roughly 55 minutes, this tour  gives highlights of the underground temple’s “pressure control water tank.” Groups are welcome to join the trip, which has a maximum capacity of 50 persons. When the pump is running, it is impossible to visit.

This large cavernous area is called an “underground temple” because of the huge pillars and imposing cathedral-like space.

Rates to join this tour are 1000 Yen and is suggested that you arrive 10 minutes before the tour begins. Tours may be canceled in times of heaving rain and typhoon seasons.

You’ll be able to see the facility in operation from the work corridor (catwalk) within the pressure control water reservoir when it’s fully operational and water is present.

This is a limited group tour with a maximum of 20 persons per tour.

The heart of the outside drainage canal of the Tokyo metropolitan region, consisting primarily of its massive seventy-eight pumps.

This tour walks you through the pump’s operational performance and incredible job of moving huge volumes of water. Tour describes the pump abilities and allows you to see the pump chamber. You can also go to the gas turbine area. For machine enthusiasts, this is a must-take tour. When the pump is running, it is closed to tours.

The outside drainage canal of the metropolitan region has the largest drainage pump station in Japan. The “vertical spiral mixed flow pump” and the “two-shaft gas turbine” are the main pieces of equipment.

There are four huge centrifugal pumps and four gas turbines. This is the only course where you’ll get to witness the gas turbines, which you’ll never get on the other tours offered.

The Tour fee is 2500 Yen and the total tour time is approximately 100 minutes.

By adding the feature of navigating the catwalk (worker’s passage) and halfway down the deep shaft stairway, you can truly appreciate the depth of 230 feet deep shaft. (As safety equipment, you must wear a harness and a helmet.)

When the pump is in operation, it is closed to tours.

The time required for this tour is around 110 minutes and the group tour Capacity is 20 persons.  The Tour fee is 3,000 yen per person.

With special equipment, this tour explores the massive impeller at the innermost section of the pressure-regulating water tank, which is the most requested tour from our visitors.

It’s a course with several highlights, including the ability to experience the flow of water from the first shaft to the pressure regulation water tank and the drainage pump’s impeller. Hip waders, boots, and a helmet with spotlights are provided to each guest.

When the pump is running tours are closed.

The time required is around 110 minutes and the tour capacity is about 20 persons.

The admission fee is 4,000 yen per individual

There is also a museum dedicated to how the water tunnel system was constructed and how it operates. Tokyo itself sits near sea level and thus flooding was often an issue during the rainy season and whenever typhoons made landfall near the city.

This ingenious system has helped Tokyo to deal with the often massive volumes of water and make it safer for its citizens. Up to seven times each year the system is employed to remove the excess water back to the sea safely and efficiently.

Ultimately the water is deposited into Tokyo bay. Each tour given is accompanied by a guide and in the event, that weather turns to rain the tour may be suddenly canceled to ensure the safety of each visitor.

The unusual environment inside the chambers has been used in many Japanese TV shows, commercials and even incorporated into video games.

Explore the official website and make a reservation there to see this incredible mammoth project below the streets of metropolitan Tokyo.