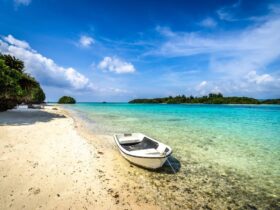 Japan is beautiful any time of the year, but summer in Japan can be very exciting. There are numerous matsuri, or festivals, that you can attend that are both rich in historical significance and full of fun opportunities to embrace Japan’s culture.

Before you plan your summer getaway to Japan, you should explore which matsuri you might be interested in attending, being that there are numerous options that are worth planning your trip around.

Japan is known for its abundance of opulent festivals. While some communities might have a festival once or twice a year, there are numerous celebrations throughout Japan in many major cities and even smaller communities.

Some of these matsuri have been celebrated in Japan for hundreds of years. Matsuri can also extend over numerous days, with different events being held on different days.

You’ll find everything from dancing, to food, to fireworks, to elaborate costumes and so much more at a Japanese matsuri.

Below are a few that you might want to check out before planning your next Japan trip.

The Gion Matsuri festival in Kyoto is one of the oldest festivals still celebrated in Japan every summer. The festival is so special in Kyoto that it is celebrated for the entire month of July. The biggest events typically fall between July 14th and July 17th.

One of the draws of the Gion Matsuri is the cascade of floats that are paraded through the streets, beautifully decorated to represent different prominent areas or businesses in Kyoto.

These floats tend to be incredibly elaborate and intricately decorated and can be many feet in height and length.

The parade starts at Yasaka Shrine and makes its way down the street. Matsuri-goers can also enjoy food and games set up throughout the streets of Kyoto.

Many homes will also decorate with beautiful flowers, lanterns, and banners to celebrate the momentous occasion.

The Nebuta Matsuri is known as one of the most popular festivals held in Japan. The festival expands from August 1st to August 6th, with an event to see each day.

In the evenings, you can watch floats, lit up, being carried by dancers, creating a breathtaking sight.

Some of these floats are unlike any floats you will see at other festivals, with some taking close to a year to build from scratch.

These parades last for a very large portion of each day, and the festival ends with an evening fireworks event. Some of the floats used throughout the festival will also be cast out to the sea.

The Yosakoi Matsuri is one of the many big draws to Koshi during the summer and is held on August 10th and 11th. It is one of the newer festivals to be celebrated in Japan, but that being said, it has been celebrated for over 60 years.

Attendees can enjoy different types of performances and sights during these two days, with one of the most exciting being dancers with wooden clappers. It’s a very lively festival that will have you dancing and smiling all day.

In the evenings between August 12th to the 15th, the Awa Odori Matsuri is held in Tokushima. This festival is important to the Buddhist faith that has been celebrated for 500 years and allows participants to honor their loved ones who have passed on.

People will set up altars, and it is believed that their ancestors and loved ones will come to these altars.

If you are in Tokushima during these three days, you will be able to experience amazing music played in the streets during the evenings.

The music consists of Japanese drums and Japanese guitars, known as shamisen. There are also Bon-Odori dancers that you can see, dressed in straw hats and yukata kimonos, dancing to the music.

This beautiful fireworks matsuri has been celebrated in Japan since 1732, making it the longest-running fireworks display in the world.

The fireworks bring hundreds of thousands of visitors to Tokyo on the last Saturday of July.

The fireworks are truly a sight to behold, especially when you enjoy the shows against the horizon overlooking the beautiful Sumida River. There are even sometimes competitions for who can create the most elaborate fireworks display.

You will often see many Japanese locals who partake in the festivities dressed in yukata kimonos on this day.

As many know, Mount Fuji is very sacred to Japan. Thus, it’s only fitting to have a fireworks matsuri in the area.

The festival is held between the first and fifth of August every year, and each day consists of a fireworks display. The most elaborate display is saved for the final night of the matsuri.

The Fuji Five Lakes are all lakes close to Mount Fuji. Many visitors will flock to these lakes every year, being that they all offer great vantage points for looking out at the spectacular mountain.

Each day, festivities will be held in the area near each lake, so it’s worth planning out your visit to Yamanashi around which event is held on which day.

There are also other things to enjoy throughout the festival, including lantern displays and live music.

The Tenjin Matsuri in Osaka City pays homage to the esteemed art patron Tenman Matsuri, and it has been celebrated in Japan for around one thousand years.

There’s a parade as part of this matsuri that consists of thousands of people dressed up, carrying shrines down the street. These shrines are known as omikoshi.

The performers who carry these omikoshi also wear beautiful clothing that is reminiscent of Japan in previous centuries, from the 700s to the 1100s.

They also perform dances as they make their way down the streets. Once the sun settles, many will sit by fires and enjoy fireworks.

This festival is held on July 24th and 25th and starts near the Tenmangu shrine in Osaka.

The Sendai Tanabata Matsuri is another prominent celebration in Japan, with other areas of Japan holding similar celebrations.

The Tanabata Matsuri is rooted in Japanese mythology, and it is believed that on the night of this festival, two deities in love separated amongst the Milky Way are able to reunite.

On this day, many will write wishes on pieces of paper and use them to decorate streamers. Throughout Sendai, there will also be a plethora of streamers and banners with colorful designs hung on bamboo poles. The whole community comes together to create these artistic decorations.

This festival is typically held between August 6th and August 8th.

Yamaga in Kumamoto Prefecture is known for its onsens, as well as its annual Yamaga Toro Matsuri. The festival spans from August 15th to August 16th, and there are many things to enjoy throughout these two days. On the first evening, there is usually an elaborate fireworks display.

On the second day, you can witness hundreds of female dancers who will dance the day away, balancing golden lanterns on their heads and wearing yukata kimonos.

The lanterns also light up, making for a breathtaking display when the sun goes down.

This two-day festival full of dancing and illumination honors Emperor Keiko when he made the journey to the Yamaga area guided by torchlight held up by villagers. The traditions have always consisted of lanterns in some form.

This matsuri is held in Soma in Fukushima, which is known for its horses. Horse breeding is quite prominent here, so a festival is held each year to honor that history.

There is a famous horse race each year where riders dressed as samurai carrying katana will race on their horses against each other.

Another event held as part of this matsuri, known as Shinki Soudatsusen, has participants, known as samurai horsemen, competing for shrine flags that get shot up with fireworks into the sky.

There are many other events held during this festival, which takes place on the last Saturday to Monday of July.

Events are held at different locations throughout Fukushima, including the Ota-jinja, Nakamura-jinja, and Odaka-jinja shrines.