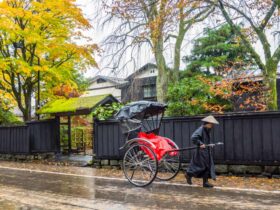 My first meeting with a Japanese dog was 10 years ago. A friend of mine had gotten one in the time period since I last visited him. The dog was an Akita. Very calm and very well behaved I was to discover. Since the dog had never seen me before and just watched me carefully as I pulled into the drive, I was somewhat puzzled.

This pattern repeated itself and each time I came to visit, over the years the dog behaved in the same manner. It was odd to me that he didn’t seem to be disturbed at a stranger’s visit to his master’s home.

I know that every dog has a unique personality but still, this dog wasn’t like any I had ever come across. In my past years of working directly with homeowners in a previous career I had seen hundreds maybe thousands of dogs, but this breed seems unique to me.

I took a deeper look into the breed to learn more about it and consider whether or not I wanted to purchase one. Japan has six common breeds and some consider these 6 the national dogs of Japan.

As a general rule, the roots of today’s Japanese dog breeds may be traced back centuries. The six breeds are native to Japan, according to Japan’s kennel club after many generations of breeding and crossbreeding are Shiba Inu, Hokkaido Inu, Kai Ken, Shikoku Ken, Kishu Ken, and Akita Inu.

The word Inu or Ken translates to (dog) and a somewhat complex usage is for another day. In general the word behind the name just simply means dog.

So where did this friendly Akita my friend had come from? Land of the rising sun and the extremely loyal dog as you will see at the end of this article.

The Akita is a dog breed that originated in northern Japan’s mountainous areas. Akita dogs are divided into two types: a Japanese line known as Akita Inu or Japanese Akita, and an American breed known as Akita or American Akita.

The Japanese strain has a limited color variety, with all other colors being deemed atypical of the type, but the American breed has all normal coat colors found on many breeds.

The Akita has a short double coat typical to that of many other northern dog breeds from this area of Japan,  breeds like the Siberian Husky, however, due to a recessive trait, long-coated dogs can be seen in many litters.

Akitas in the United States come in a variety of hues, but Japanese Akitas are generally red, white, or brindle. Furthermore, unlike Japanese Akitas, American Akitas may be multicolored and/or have black faces, which is not considered purebred and is not in the breed standards.

Akitas in the United States are usually bigger and heavier boned, with a larger head, but Akitas in Japan are lighter and more finely featured, with a smaller head.

The Shiba Inu had been trained for hunting. A nimble dog that does well in steep mountainous areas. Although it is sometimes confused with other Japanese dog breeds such as the Akita Inu and Hokkaido, the Shiba Inu is a unique breed with its own lineage, personality, and somewhat smaller size.

The Shiba is a breed that feels compelled to keep itself and its surroundings clean. Like cats, they are frequently observed licking their paws and legs.

They usually go to great lengths to keep their fur clean. Shiba pups are simple to housebreak and, in many circumstances, will housebreak themselves due to their fastidious habits.

Wanting their owner to take them outdoors after meals and naps is usually sufficient to train the Shiba for proper toileting techniques.

Kai Ken is a smart, agile, attentive, and fearless dog. They are natural trackers and excellent watchdogs, having a cautious demeanor around strangers but show fierce loyalty to their owners.

The Kai Ken, also known as the Tora Inu or Tiger Dog due to its coat, the breed is nationally recognized. It is one of the six original Japanese dog breeds and is a fairly uncommon dog even in Japan. They are often sociable, excellent with children, and generally non-aggressive toward other dogs.

Many of them like swimming and have been known to swim across rivers and even climb trees in pursuit of their prey.

Shikoku dogs are hardy and energetic enough to go across rugged terrain. The dog’s entire movement is nimble, and its stride is energetic.

They make a great companion for adventurous outdoor individuals, but they can be difficult to teach off-leash. Outside, they are highly active and lively, but indoors, they are typically peaceful and quiet. A  smart dog who picks things up quickly.

They are not as rebellious or aloof as some of the other native Japanese breeds, however training them takes time.

In terms of aesthetics, the Shikoku dog is a bit unique. Physically, it resembles a Siberian Husky, although it is smaller and lighter in color.

Kishu Ken is more social in a single-family or person setting. They are daring and fearless, and they will be devoted to their masters. They pursue tiny animals because they have a strong predation drive. If reared alongside cats, some have been reported to do well.

Kishu may become hostile with other dogs that do not respect their personal space, or become confrontational with other dogs when agitated.   They are stubborn and headstrong, necessitating training, yet they are dedicated and loyal to their families and get along well with kids if they grow up with them.

When it comes to strangers, they might be distant or cautious. They are clever, strong-willed, and readily housebroken.

The breed is noted for its devotion to its owner, courage, and ability to tolerate the cold. It has an intrinsic grasp of direction or scent, so it can always find its way back to its master, no matter how far away. The temperament of the dog varies based on their master’s training and upbringing.

The Hokkaido’s play behavior differs from that of other breeds, with a crouch and prowl technique that is sometimes misinterpreted as ferocity.

As a result, Hokkaido dogs are frequently regarded as leash-only pets. They have high owner attachement and perform well with retrieval play because of their hunting origins.

They get along well with kids and other pets if they’ve been exposed since birth and/or have been properly socialized. To keep fit, Hokkaido needs modest yet consistent activity. They should be exercised every day having lengthy walks.

The Hachiko monument in Tokyo honors a genuine story of an Akita dog that waited for his master every day at a Tokyo railway station.

The dog’s owner, a Japanese college professor, died in 1925 while on his way to work on the morning train or at the University depending on the version that is recounted. The dog kept his daily watch for nine years until Hachiko died.

The narrative had such an impact on the Japanese people that a bronze monument of Hachiko was constructed at Shibuya Station in 1934, and was re-created after the war in 1948.

Hachiko Monogatari, a Japanese film about Hachiko, was a box office hit, afterward in 2009, Hollywood recreated the story for English-speaking audiences as Hachi: A Dog’s Tale, starring Richard Gere.

The Japanese love their pets. Although Japanese dogs are very popular the trend in Japan is probably that more Japanese own cats rather than dogs because of the limited spaces in most apartments.

However, walking through any major park or pedestrian areas dogs can be seen walking with their owners daily.

The six breeds are by no means the only ones in Japan but are simply recognized as the six seen of native to Japan.

Check out the above link to the American Kennel Club on finding a reputable breeder.