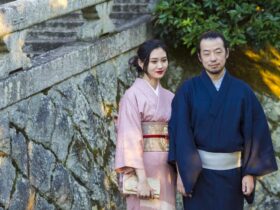 New Year is a holiday that is celebrated all over the world as a time of new beginnings and a fresh start. Japanese New Years’ customs are a time that is rich in cultural history and celebrations unique to Japan.

Many people celebrate the new year and think of the time as a rebirth and a time to start over, setting themselves goals for the upcoming year and ridding themselves of unwanted items, thoughts, and negative habits.

A kadomatsu is a traditional Japanese New Year decoration made of bamboo and pine needles or pine branches that is set in pairs in front of home entrances to welcome ancestral spirits or kami (gods).

When it comes to Asian New Year many people immediately think of Chinese New Year, but only a few know of Japanese customs and traditions of the New Year.

In Japan, the new year’s celebration is filled with exciting and traditional festivities and is a time of joy and love among family and friends. Here we will tell you everything that you need to know about Japanese New Year customs and traditions to help you better understand how to celebrate the holiday.

In current times the Japanese New Year actually falls on January 1st much like the rest of the world. However, this was not always the case. Japanese New Year has been celebrated on the first of January only since Japan changed to the Gregorian calendar in 1873 before the country ran according to the lunar calendar.

Even though the New Year is only the first day of the first month, usually many businesses close until the third day in order to allow people to spend time with their families and rest before starting the new year holidays.

What food is eaten at New Year?

One of the main things that people look forward to for New Year’s celebrations in Japan is the food. Japanese culture is rich when it comes to food and New Year’s is no exception. The food eaten at this celebration is known as “osechi-ryori”, or simply just “osechi”.

Most of the celebration foods do not need to be kept in a fridge and so they are either dried, sweetened, or are sour. This is because the traditional food eaten for the New Year’s celebration dates back to a period when it was uncommon for people to be able to refrigerate things in their homes.

For the evening before, New Year’s Eve, soba (buckwheat) noodles are a tradition. This dish symbolizes longevity and distancing yourself from the misfortunes of the past year.

Activities for the New Year

The new year is a time for families to gather together and spend some time relaxing. This means playing games, although many have become significantly less popular in more recent years. Some more traditional activities are kite flying, making crafts, and even playing cards.

Japanese New Year is a very auspicious day for many, with a lot of people believing it to set the tone for the rest of the year. That means that most people will take the day off of work, relax, have everything cleaned in preparation and try to make the day as relaxing and free of stress as they possibly can.

In addition to relaxing, there are many traditions that are carried out.

In Japan, there are some very popular viewpoints for the first sunrise of the new year and these are often sold out in advance with some people getting there as early as 5 am to get the best viewing spots.

Another traditional Japanese custom for the New Year is bell ringing. All over Japan on the 31st December Buddhist temples will ring their bells a grand total of 108 times. These 108 rings symbolize human temptations in the religion and aim to relieve individuals of them. This, they believe, helps to rid people of the past year’s sins.

New Year’s is one of the busiest times for the Japanese post offices due to the number of postcards that people send over this holiday. The postcards, or nengajou as they are also known, are much like holiday greetings cards. They often have cute designs on them to celebrate the new year and are handwritten and sent among relatives and friends.

The tradition stems from when letter writing was more popular and people would write letters to family members who lived far away to tell them how their family was doing and to keep them updated on all the things that have happened in the past year.

The postcards are marked with the word “nengajou” so that they are delivered on the 1st January and not after. Due to the number of postcards sent many post offices will actually hire students as part-time workers in order to be able to keep up with the demand.

Another very important part of welcoming the New Year in Japan is hanging decorations. The purpose of these decorations is to bring good fortune into the home. There are a few different types of decorations that you will commonly see when walking around Japan over the New Year.

“Shimekazari” is a type of decoration that is hung above doorways and is used to invite in the gods of good luck and to help protect the family from evil spirits. They are traditionally made from straw rope, a bitter orange, pine, and other decorative pieces.

“Kadomatsu” is another symbolic decoration. It is made up of three bamboo shoots of different lengths which symbolize prosperity, pine, which symbolizes longevity, and plum branches for steadfastness.

They are traditionally believed to be inhabited by the kami or gods but after burned after the 15th January.

As a general rule, many Japanese people follow the tradition of “hatsumode” which means that they will visit a temple in the New Year, typically between the first and third of January. This allows people to wish for whatever they need for the new year such as good fortune, health, or even prosperity.

Although any temple or shrine can be visited there are some that are significantly more popular than others in Japan and so, if you want to visit one of these then you should be prepared to arrive early or plan for long lines.

You can also visit the temples any time in the new year, although after the 3rd of January it is not considered to be “hatsumode” anymore.

New Year in Japan is filled with many different traditions and also mixed with some more modern and westernized celebrations. However, the overarching theme of the new year is to bring good health and fortune to the family and to meet with loved ones.

New Year’s day is a mix of relaxation and spiritual traditions, helping to set a new stress-free tone for the rest of the year by eating well and delicious foods with family, taking a few days off of work, and reading postcards from relatives.

You will see many homes and businesses decorated with spiritual decorations to help protect people from bad fortunes and to help make the new year as lucky as it can be.