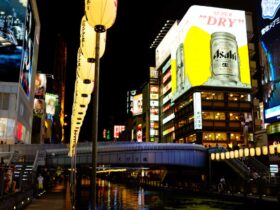 Kanpai, Kampai Or Kenpai? (Which Is Correct And One Only Used For Funerals)

To fly a drone in Japan you must obtain the proper legal documents and have filled out the corresponding paperwork. Additionally, your drone must meet the requirements set out by the government.

Before operating a drone, you must first apply in Japanese to the Ministry of Land, Infrastructure, Transport, and Tourism for at least ten days (excluding Saturdays, Sundays, and holidays). Flying must be performed during the daylight hours unless prior authorization has been obtained.

In this article, we will be taking you through everything that you need to know about flying a drone in Japan, including the legal requirements, the rules and regulations, and the equipment that you must have.

Who are the agencies responsible for controlling drones in Japan?

In Japan, there are three main agencies/bodies that are in charge of drone control these are: Japan Civil Aviation Bureau (also known as JCAB), The Ministry of Land, Infrastructure, Transport, Tourism, and the Japanese Regulatory laws.

Are drones legal in Japan?

Yes, drones are legal in Japan but they must adhere to strict rules and guidelines both about the drone itself and the flying restrictions.

What are the rules about drone use in Japan?

There are many different rules that you must adhere to when flying a drone in Japan. Here we will break them down into more manageable groups of information.

How high can I fly my drone?

However, there are exceptions to this rule. You may fly a drone above 150 meters but you will need special permission from air traffic control and this will need to be arranged in advance.

Can I fly my drone near an airport?

However, if you are in need of aerial footage from an area near an airport you can request access to the airspace by submitting an application to the airport manager who will review your request.

Can I fly in busy areas?

Another thing to take into consideration when flying a drone is the amount of room available to you.

For this reason, Japan states that you are not allowed to fly your drone within 30 meters (or 98 feet) of any people, vehicles, or buildings. This is to ensure that everyone and everything is safe.

However, if you need to breach this rule, for example for filming purposes, then you can submit a request to do so.

Can I fly my drone at night?

No, you are not allowed to fly your drone at night in Japan. The restrictions in Japan mean that you are only permitted to fly drones between sunrise and sunset.

Again, like most rules, you can be granted an exception by submitting a request and receiving approval.

Can I fly my drone out of sight?

One of the more important parts of drone safety in Japan means that you must always be able to see your drone. This means that you are unable to fly it too far away from yourself and so long-distance drones have no advantage here.

Even if your drone comes with a camera that allows you to see from its point of view, or a GPS tracking system that tells you exactly where the drone is, this is still not allowed out of the line of sight.

You must be able to physically see the drone yourself with your own eyes.

Can I use my drone to carry things?

Again, there are exceptions to this rule as long as you are granted permission by the appropriate authoritative body. In this case, you will need to explicitly state your reasons for the exception and your plans.

Can I drop things from my drone?

You are not allowed to use your drone to drop anything in Japan. It does not matter what it is that you are planning to drop, even if it is a liquid, it is not allowed in Japan.

Again, if this is necessary you may request permission to do so in advance.

Can I fly my drone over parks?

This is one of the strictest rules when it comes to drone usage in Japan. You are not allowed to fly a drone over any of the 81 parks and public spaces in Japan and no exception will be given even for filming purposes or personal use.

Please note that even very small and light drones will still count and this will be a punishable offense.

Can I fly my drone through the city?

Japan’s drone laws protect its citizens by ensuring that no drones are allowed to be flown through a city, for example, an area where there are more than 4000 people in a square kilometer.

However, special permission can be granted if your exemption application is approved.

Can I use my drone to film events?

It does not matter how small or big the event is, if it applies to the above-stated definition then you will need to have permission to use a drone in the area, even just to fly the drone and not film or photograph the event.

Are there any areas that I can’t fly my drone?

In addition to the areas that we have stated above (such as public parks, public spaces, densely-populated areas, within a certain distance of buildings, vehicles, and people) there are some areas of Japan that you are not allowed to fly a drone.

The space that you must leave around the following areas is 300 meters or 984 feet. Again, you may fly your drone closer to these areas (i.e. within 300meters or 984 ft of them) if you have obtained the necessary permissions ahead of time. Restricted areas include:

Please keep in mind that this is not a set list of restricted areas and that there may be more restricted zones added to the list in the future.

It is always best to do your research ahead of time when flying your drone to ensure that you are not violating any rules and you have any necessary permissions to fly your drone.

Is there are weight limit for drones?

Yes, there is a weight limit for drones in Japan. You are not allowed to fly a drone that weighs more than 200 grams without preapproval or permit. If you are found to be exceeding this weight limit then you can be fined up to 500,000 yen.

When do I need permission to fly my drone?

Here we will run you through a few examples of when you will need to request prior permission to fly your drone.

You will need advance permission if you are planning to:

In some cases, you will permission to fly over structures as Japanese law states that the owner of a structure also owns the airspace just above. Some examples of this include railways, schools, temples, and shrines.

How do I apply for permission to fly my drone?

In some cases, you may be asked for additional information to back up your request or to correct your application. Once this has been reconsidered you will receive an answer about your application stating that it has either been accepted or denied.

Apply For An Official Drone Permit In Japan

Once you have received permission you will need to ensure that you keep a copy of the permission on you while flying your drone.

Can I apply in English?

Unfortunately, you are currently unable to apply for drone permission in any language other than Japanese. Written permission must be written and requested in Japanese. The online submission form is also only available in Japanese.

What is the punishment for breaking a drone regulation?

There are different punishments, such as fines and possible jail time, that are handed out depending on the regulation that has been broken, how many regulations have been broken, and to what extent they were broken.

In most instances, you can be fined up to 500,000 Japanese yen if you violate any of the rules and regulations stipulated above.

However, the major exception to this rule is if you are operating a drone whilst under the influence (either alcohol or drugs) in which case you can be fined up to 300,000 Japanese yen and can face up to one year’s jail time.

You should always try to operate your drone as safely as possible, making sure that you are clear of mind, you are not performing any dangerous maneuvers, and that you adhere to all of the rules above such as not flying your drone too close to any person or building that may cause harm or safety issues.