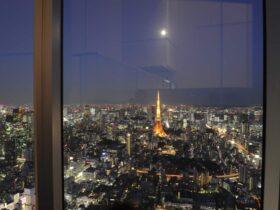 One thing that many people from Western countries find unique about Japan is that there are robots used nearly everywhere in the country.

Japan has always had reputation for being at the forefront of technology and robots are a big part of Japanese culture. When tourists visit different locations in Japan, they begin to notice more robots assisting the workforce.

The presence of these robots has brought on a great amount of debate from tourists. Many people are under the impression that these robots are taking over the Japanese work force and even worse, taking over people’s livelihood. However, top experts from Japan couldn’t disagree more.

Each robot designed has a purpose. Many people and business owners in Japan need more help with their daily companies needs, and these robots are actually helping to make the workload of employees easier.

Honda conceived and developed ASIMO, a humanoid robot. ASIMO is the world’s most sophisticated humanoid robot as of 2015. ASIMO was introduced in the year 2000 as a multi-functional mobile assistant.  The robot itself has improved in function and technology as time passes.

The number of industrial robots in Japan is the greatest percentage-wise in the developed world. In an effort to decrease labor costs and enable industrial automation, almost a quarter of a million robots are in use today. Japan hopes robots to be the equivalent of what automobiles were to innovation in the twentieth century.

Are you interested in learning more about everyday robots in Japan? You’ve come to the right place. Today, we’re going to explore how these robots are making an impact on Japanese culture.

In the US, if people were to enter an establishment and notice a robot in place of a security guard, they would likely have a sense of confusion. This is because the unemployment rate in Western countries is higher and people aren’t impressed to see modern technology take jobs away from everyday people.

However, life in Japan is a lot different. There is actually a higher need for more assistance in labor-intensive industries as the birthrate has dropped year over year. Even businesses that are fully staffed can use the help of robots in the workforce to ease the load for the employees.

Not only do these robots help people complete their tasks quicker, but they have also helped decrease the number of injuries that occur on the job in some higher-risk occupations such as heavy industry and construction.

In a sense, robots that have been designed for work are not meant to replace human workers. It’s no secret that many of Japans workers today or overworked and need a helping hand or at least a decrease in daily work hours.

These robots are made to complement the worker so they can complete their tasks successfully.

Don’t be afraid of the robots

When people picture robots in the workforce, many people become worried about their job security. The idea of these machines taking over is like something right out of a science fiction movie.

That is why roboticists have designed these machines to be human-like and with a friendly appearance. When a new prototype is being built, there is careful consideration in the aesthetic design.

Many roboticists believe that if the overall appearance of the robot is friendly, then people won’t be intimidated by it. While it’s important to create a design that doesn’t frighten people, what roboticists were quick to learn was that a cute or friendly robot can actually become therapeutic.

When robotic dolls were introduced to nursing homes, experts have seen a positive effect among patients that were typically very reserved and withdrawn.

Patients that didn’t interact with others felt comfortable interacting with the robots. Robotic humanoids and animals have become more common in Japanese nursing homes, providing patients with a resource for mental stimulation.

Patients enjoy their time interacting with these robotic dolls. They can pick them up and hold them, similar to interacting with a pet or child. Shy patients who aren’t comfortable expressing themselves around other patients or staff are happy to be in the presence of one of these robots.

As mentioned above, many people in the west aren’t excited about the idea of robots taking jobs. However, work-life is a lot different in Japan. There is a higher need for more help with labor-intensive jobs, which is where robots are proving to be general labor assistance great help.

It’s important to remember that Japanese culture is a lot different than that of the west. In Japan, when there is an overload of work, they don’t seek assistance from immigrants as much as other countries. This is because Japan is known to be a very domestic workforce orientated country.

They don’t look at bringing in millions of people from different countries to fill these jobs, instead, they use innovative technology to get the job done where possible.

As people get older, their ability to do tasks at the same speed declines. Many Japanese people are not ready to leave the workforce, even though their bodies are starting to slow down.

Bringing robotics into the workforce allows aging workers to keep their positions and improve the rate of production.

Many of these robots can be monitored by the workers to ensure everything is functioning as designed. They are even able to give the robot commands, feeling as though they are in control. There are even robotic exoskeletons that can come in handy for lifting heavy objects in the workplace.

Are robots discouraging younger people from entering the workforce?

A lot of people would argue that robots are doing the jobs that many young people could be doing. This has them believing that fewer younger people are entering the workforce due to the number of robots. However, this isn’t the truth at all.

Many young people are excited to work around robots and see more of them up close and personal. The younger generation isn’t afraid of robotic culture, instead, they embrace it. A lot of these young workers are used to seeing robots in their life.

Can robots help around the house?

Everybody’s house is generally clean in Japan. A busy schedule is no excuse to have a dirty living space in Japanese culture. However, it’s common in Japanese households for everyone to have a job with long work hours.

After a busy day at the office, most adults don’t have the energy to wash dishes, vacuum, and fold the laundry.

Japan is leading in the robotics industry and it’s not uncommon for people to have robots in their own homes to help with cleaning.

The robotic vacuum is becoming common in the west, where people can set the robot on a timer and it will keep the floors in their house clean without ever having to worry about lifting a broom.

In Japan, many companies are developing robots that will do more than just clean the floors. They are making robots that will be programmed to perform basic housework, like cleaning dishes, dusting the furniture, and folding the laundry.  While this may seem futuristic to people living in the west, it’s completely normal in Japan.

How can tourists experience robotic culture in Japan?

When tourists visit Japan, they will likely cross paths with more robots than they imagined. However, most people are well aware of the fascination some have for robots. Especially when they are visiting from areas where robots are only seen in movies or the media.

Japan is well aware of how many people around the world are intrigued by how normal robotics are in everyday culture.

There are many destinations throughout the country where tourists can visit and get a full taste of the robotic experience. They can learn more about how these robots are part of Japan’s daily life and see prototypes on upcoming models.

Some of the best spots to visit in Japan to see more robotics are:

Many shops throughout the country will have Pepper in store. Pepper was co-developed by a Japanese company called Softbank. This robot is programmed to assist shoppers in retail locations and other business establishments. If you do some shopping in Japan, Pepper may be able to help you find what you need.

As you can take away from this article, robotics is a big part of Japanese culture. While they seem futuristic to many, they are a normal part of Japanese life. Seeing a robot in a Japanese office is just as common as it is seeing a coffee maker in a western office.

Every year, there is Japan Robot Week, where celebrations take place in Tokyo. During this week, there are several different robot trade shows. The biggest one is the International Robot Exhibition. This event attracts people from all over the world.

Robots are changing the future

Today, people can find robots assisting customers in stores or monitoring hotel entryways. However, there is still more research to be done. A lot of research is being put into specialized robots.

One that many people are looking forward to seeing the prototype for is a robot that is able to detect and possibly predict people’s healthcare changes.

In many schools across the country, robots are being introduced to the classrooms. They are programmed to help Japanese students learn English.

The education industry has spent $2.3 million on developing robots for in-class education. So far, over 500 Japanese classrooms now have robots to assist with learning.

Robots are a part of everyday life in Japan. They are programmed to make life easier for people when they are at work and even at home.

As more research gets put towards robots, people can expect to see them in more Japanese industries. Japan’s present is what the Western countries’ futures could look like, especially once more business and homes adapt to the new robotic technology.